As I've mentioned before, my household is looking ahead into re-entering the foster care world soon - probably within the next few weeks. We've been saying after Thanksgiving. Big Brother A is praying, "God, please let Thanksgiving be tomorrow so we can do foster care again!"

It's felt really strange to tell people "we do foster care, but not right now" over the last ten months. Ten months! I can't even believe that Baby S left us ten months ago. We're still on the roller coaster for the ups and downs of his life. We're still communicating, still having him over, still texting about his therapists and diagnoses and struggles. We're still missing him. We're still praying for him. He's still in our nightly "sunshine" song where we thank Jesus for each part of our family. It's still "Baby S's crib"; "Baby S's toy"; "Baby S's carseat". We have diapers and spare clothes in his current size. So although we're technically not "doing foster care" it feels like all that has really changed (other than the obvious empty bed) is the lack of communication with case workers. The rest of the ups, the downs, the drama and the love have all stayed the same.

All that to say that it's been strange feeling like we're advocating for something but not really doing it, all while feeling exhausted from doing something that still feels a whole lot like foster care even though it technically isn't. Now we're talking about adding another child, and it's always framed in terms of "if Baby S" and "when Baby S". We're not filling his bed. Possibly ever. We can keep serving his family by being there if Birth Parent becomes unable to keep up with our little guy. It's something Parent mentions regularly. We have another crib, though. We might be crazy (when we think about "what if Baby S AND..."), but we're getting excited to fill it. 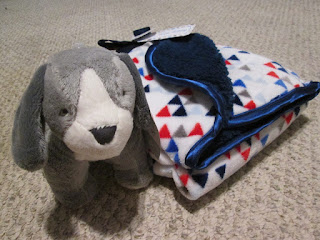 We picked out some special new toys for our next foster son. We hope having something soft and warm of his very own will help him to feel some love and comfort while his world is scary and changing.

Excited. And can I honestly say... Terrified. Knowing something is coming does not make it easier. For example, knowing we'd be tired with a newborn did not make being tired feel any less tiring. Knowing it would hurt having Baby S leave didn't make it any less painful. And knowing how much it rocks our world and how tightly the grief of losing a child winds into every part of life will not make it easier next time. If it ever gets easier, we're doing it wrong, and that will be when we need to quit. This round of goodbye had a huge impact on me emotionally and mentally. I feel like, between that and a physically rough pregnancy, I was battling depression I didn't even know I had until it started lifting in just the last month. So looking from my newly clearing lens into a future that could involve another prolonged goodbye and another painful round of grieving is still scary. In fact, it's probably even more terrifying than it was when we started foster care because the first round of grief keeps getting ripped open. Thinking of stacking another hurt on top of that - well, let's just say it might be a big growing moment for my mental stability! And adding to that the fact that there's no guarantee of future contact once a child returns home? It's heavy.

So old fears have not left. They may be even stronger. But I've grown since the last time we've been in this waiting-for-a-call place. The year of grief, goodbye and depression has grown and stretched me. It's the kind of growing pains that keep your kids up at night, but then in the morning you're almost positive they're a whole inch taller than yesterday. I have learned just how weak I am in the last year. And in that weakness, I have come to be totally and completely awed by God's strength. He has always been enough. I have never been enough. And in every new way that I see my insufficiency for this task, I see even more clearly God's ability to use those very insufficiencies to make his part in this household shine even brighter. It's an amazing thing. One of God's greatest gifts in the last year has been learning that "I'm not strong enough" is true. That's okay, because God doesn't need strong people. He uses people like Paul from the Bible who know their weakness and let God shine through by using an impossibly broken person for too-amazing-for-them things.

When we started this journey, we quickly learned that one question almost always follows after people find out we're a foster family. "Won't you get too attached? Wouldn't it be too hard to give them back?" I've gone through various answers in our three years of fostering. I started with "Yes, it will be hard, but it will be worth it." I went through "Yes, it is absolutely killing me and it's only by God's grace that I'm standing upright, dressed and showered, pretending to be a functional person." (Don't worry. I didn't say any of that. Just YES and then moved on, because I couldn't go into any more than that without sounding like a crazy person.)

And now I've landed on a new answer, which I hope is more helpful and informative.

"Won't you get too attached?"

Our Baby S has regressed in a lot of ways. It's been painful to watch that. But through it all, he loves people. He loves us. He seeks attention. He makes eye contact. (He really does. They say a lot of things, but he still has more HIM left with us than in other situations, and we still see it.) He laughs and giggles and plays chase. He tries to copy his Big Brother A and be just like him. He's attached. That's the biggest thing we have given him. That is one of the only things he has kept. It might be enough to change his life, even with all of the hard things he's going through now. He knows he can love and be loved. He knows he's lovable. He knows he likes to laugh and make others laugh. Maybe, someday, he'll be able to believe that Jesus loves him because he believes that love is real.

It hurts like crazy to attach deeply to someone who leaves. It hurts beyond belief to watch someone you're deeply attached to suffer and struggle and be unable to help.

But if we didn't have foster care, these babies would be numbers. They'd be beds in a big room full of beds, with staff helpers coming in and out. They'd be played with and they'd get attention, but they wouldn't get attachment. That's our gift that they carry with them. And it is worth it. And it does hurt. And that's the whole point.

So we wait, full of nerves and fear and hope and a little bit of crazy (if our 3-month-old stops sleeping through the night we're going to wonder what we got ourselves into!). It's going to be good and hard to dive back in. We're feeling ready and not-ready.

We'll let you know when we're officially back on the list. We're hoping for December. Pray that Baby Gigi keeps sleeping so we continue to feel able to add another round of love, and awake at night, and making messes, and court and case workers, and buckling into carseats, and brotherly arguing, and sharing toys with the baby's face...
Posted by Heather