Time to Walk the Walk

I am a genuinely selfish person.

And this isn’t one of those humble self-deprecations that I’ll turn into a win for myself so you can praise me for pushing through despite how hard things are.

Let’s avoid that. My pride doesn’t need a boost.

The last few weeks have been a new level of chaos in our lives. Baby S, our former foster son, has been with us as his mother fights through some chronic medical conditions that make caring for him very difficult. 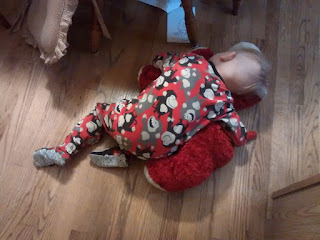 Time to walk towards the mess!

His behavioral and developmental delays are exhausting and the consistency required to effect lasting change in his life is daunting. He needs nearly constant supervision. He has little fear of our set of stairs that he can only navigate safely in one direction. He can open locks and is interested in seeing what’s outside the house. And his curiosity has no limits (think hot ovens, pots of coffee, the microwave, our fridge, every closet, on top of every piece of furniture, etc).

He’s almost two and a half and has a half dozen signs and words. Miscommunication is rampant and frustrating for everyone. The temper tantrums escalate to “glasses knocked off your face” with some regularity. (And few things get my blood boiling like seeing my wife take a hit to the face.)

The tantrums know no boundaries in time or space. They don’t happen all the time, but when they do happen it’s quite a sight. I have yet to discover a scenario more humiliating than a full-on temper tantrum in the middle of the crowded lobby at church while I’m trying to talk to someone I haven’t seen in a long time. (Nevermind, the grocery store is worse. At least at church I’m surrounded by people who love me.)

The toughest bed time was the evening I slept on the floor outside the boys’ room so I could stop him every time he got out of his crib. Sleep took two hours and 18 hallway tackles (you start counting when the absurdity gets to such insane levels that all you can do is laugh).

We don’t know what the future holds. He isn’t in our home through foster care, but because we genuinely love him and his mother and want to help in a tough season. We’ve seen significant developmental progress even in these few weeks, but the potential exists for all of this to vanish as he eventually heads back home and we share parenting responsibilities.

Just walk towards the mess.

That’s been the battle cry of our family for the last few years as we’ve navigated this foster care journey. Simply repeating it to myself to calm the tension as things get harder stopped working last week.

I don’t know what I expected would happen when we started all of this.

I think I assumed that walking towards the mess would be hard, but that things would work themselves out because we were doing something so sacrificial and noble. Then things got really hard and I started looking for excuses to pull out and make it stop.

Our five-year-old big boy is responding negatively and we are seeing some of his worst behavior.

The emotional baggage is weighing heavily on my wife.

My four-month-old baby girl isn’t getting the attention she should to help her grow and flourish.

It’s getting harder to get and stay ahead on emails and projects in ministry.

See what I did there? Lots of very noble excuses that demonstrate my care for my work and family. Those are easy tickets out of a hard situation and nobody would question them as valid reasons to step away.

And when I look at it from my wife’s perspective, it gets even worse. Over the last few weeks, she found out she was taking care of a thirty-year-old man-child in addition to the three younger than six.

All of this has brought out one very real and sobering truth about myself...

I’m willing to walk towards the mess just so long as the praise I receive outweighs the inconvenience of that sacrifice.

That doesn’t sound much like the Jesus I claim to know. Knowing we were undeserving, He still went through the trouble of showing up in the middle of the mess of humanity only to be eventually slaughtered by the very people he came to save. He agonized over this on the evening before His death, pleading to be released from that path, but submitted to what needed to be done. He was not ignorant of the weight of what was happening. And He was deserving of praise long before

Paul, a man who lived in the first century who saw the risen Jesus and who was friends with people who were friends with Jesus, wrote about this so clearly:

“In your relationships with one another, have the same mindset as Christ Jesus: Who, being in very nature God, did not consider equality with God something to be used to his own advantage; rather, he made himself nothing by taking the very nature of a servant, being made in human likeness. And being found in appearance as a man, he humbled himself by becoming obedient to death—even death on a cross!”

Now that’s walking towards the mess.

And I can barely get over myself long enough to help my boy who needs some love, some rules, some consistency, and a night watchman outside his bedroom.

Thank God His grace is bigger than my shortcomings, because I have plenty of those...
Posted by Joshua