We've now reached six months of having Baby S back with us.

His needs are still constant, but they are changing. He's growing so much. Our expectations for him have evolved drastically.

We can say things like, "Use your spoon!" and he'll stop shoveling milky cereal with his fingers and use his spoon instead. We can say "That wasn't nice! It's Baby Gigi's turn," and he'll give back the toy and pat her on the head - sometimes even with a swipe at his chest with his hand to sign "sorry." We can say "No flipping the light switch, buddy. Either on or off," and he'll (generally) push once or twice more, pick a direction, and then trot away to play somewhere else. At the very least, he chooses to disobey with a sly smile and obvious defiance, and we silently celebrate behind our stern faces because that is what a healthy little boy does.

I know I keep saying this, but when Baby S first came back, we had to constantly manage him for basic survival. Don't vault over the baby gate. Don't throw yourself down the stairs head first. Don't sit on the baby. Don't grab at knives. Don't run into the hot stove. Don't shove other people in the face with all of your strength. (He's strong enough to cause actual damage to a grown man. Ask Josh.) Our commands were direct, to the point, and always urgent. We were always a moment from disaster, for Baby S or those around him.

The problem is that Baby S thrives on chaos. His favorite game is chase. He's smart, and he's learned that certain adults will reward his disobedience with exactly the game he's craving. Tell him to put back the fragile glass thing he picked up, and he'll laugh and run full speed across the room so he can watch you huffing and puffing after him. Even after all of our training, he'll revert back to disobey-and-chase in an instant when he knows it will work. So when he returned, we had to engage for his safety, but always with the goal of backing off whenever it wasn't actually dangerous to do so. We had to give him the extra split second to obey BEFORE engaging in chase. After many many of those little moments of hesitation with no real guarantee that growth was happening, Baby S finally started putting his foot forward and oooooh soooooo sloooooowly coming when called to stop his mischief, and we praised Jesus for a turning point that had seemed impossible.

We've been taking baby steps to forward progress for the last six months. It's a moment's hesitation after saying "stay in the yard, buddy," to give him the chance to trip back around in my direction and engage in chase in a healthy and safe way. It's letting him go toward Baby Gigi and verbally reminding him not to take, then watching to see what he does. It's asking him to stay in a room with our words rather than holding him physically on this side of the gate; then eventually expecting him to respect the gate without reminders; and now, finally, expecting him to respect consistent boundaries - no going upstairs or into the basement alone, even when the gate is down.

He started with no regard for rules or safety. It's tempting to sit back now, baby gates up and every "no" out of reach, and bask in his ability to (sometimes) listen and engage. It's tempting to say "oh, he can't listen because he has this diagnosis and he doesn't know any better." But we've seen his ability to learn and grow, and we're not satisfied with him staying where he is right now (nor is the amazing team of teachers and therapists working alongside us).

So we take turns taking him to the grocery store, even though that might mean abandoning a cart full of groceries to take him home. We bring him to the zoo and take him out of the stroller whenever there's an adult with an extra hand and a very firm grip to hold on tight. We let go of his hand for brief moments in church to see if he'll walk alongside us (he won't, but it's safe to let him try there). We let him climb to the highest places on the playground and go down the big slides. 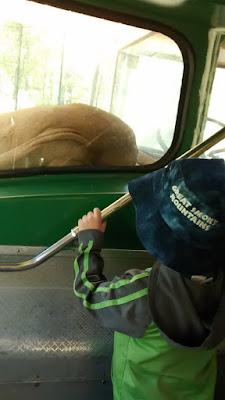 Look, no adult hands in the picture!
(Because even being pinned in between a lion and boarded up stairs with no where to run except into an adult mega counts as increased freedom for this sweet and crazy little man.)

The victories are amazing. Some days, we don't see a lot of them. Some days we're exhausted with constantly pushing. Often I have thoughts like "Why did I think I could walk to the playground with all three kids by myself?" or "Will I ever be able to talk to someone in the lobby at church again?" In those moments I have to remind myself that this intentional process is worth it. The moments that look like failures are carefully chosen growing moments, not just for Baby S, but for all of us. Big Bro A and Baby Gigi have their own growing areas, but additionally, they're learning from the hard moments with Baby S. We're having conversations about why we choose to bring him to the good things even when we end up all having to leave. We talk about why our family can't do things we used to, or why simple things are so much harder now, and we get to remember that Jesus gave up SO. MUCH. MORE. for us than what we will ever give up for Baby S.

When we win the victories, we still have to fight the temptation to be discouraged. Social media is always there reminding us how very little our victories seem next to where Baby S should be/could be/isn't developmentally. Baby videos of him from two years ago sound strikingly like Baby S today. Successfully getting through a shopping trip with Baby S in tow is not me able to grocery shop with all of my children, or able to take my family to fast food or dinner out, or able to go on a vacation together. But we can't focus on what we haven't achieved yet. We have to keep looking back at how far we've come, keep soaking in those giant Baby S smiles and hugs, and keep praising Jesus that he waded into the mess that is OUR lives.

That's where we are for now: setting up moments when Baby S can fail, because without those, he can't have true success. We celebrate the victories hard. We crash hard sometimes, too. There are glimpses of "normal life" that are beautiful and yet leave us hungrier for the way things should have been. These moments motivate us because they remind us yet again what we're fighting for. We're fighting for our baby boy. We're so proud of him. We're so in awe of his pure joy despite his circumstances. This child has incredible potential. We wade through these difficult moments believing that some day we will look at our adult son and be in total awe over how far he has come. His loving heart and incredible energy are going to move mountains for people some day.
Posted by Heather