We have our good days and our bad days around here.

Everyone has days they're simply not their best. Sometimes I wake up and I just know that every moment of self-control today will cost me a whole lot of effort because I'm ready to throw up my hands from the beginning.

I think for Baby S and for other kids who have suffered trauma and/or have a lot of other factors playing against them, self-control takes ready-to-throw-up-my hands level effort every day. Thus, having a good day is something to be incredibly proud of. It's also straight up exhausting for them. So sometimes that good day, or group of good days, results in a lot of really difficult days. It's like they can take an advance on self-control and then wind up empty for days or weeks.

Hard days can be so deflating. Regression is discouraging for all of us, including Baby S. Going from dry diapers all day to not using the potty a single time from morning to night is frustrating. It's hard not to say "you can do this because you did it yesterday!" even when I know that's not fair. There are some days that he's simply not able to do the same things he's been doing. (He's three, so there are plenty of days he's choosing to do wrong, but I'm drawing a distinction between the days he's choosing to be naughty and the days he's not able to regulate enough to make a choice.)

We're noticing a cycle. A couple of great days with big win moments will almost certainly be followed by another round of regression. We don't know when we wake up in the morning or sit down to breakfast whether it's going to be a good-listening day or a behavior-filled day; whether I'll be able to do a load of laundry without another adult in the house or whether there's a 27-second countdown before things fall apart when I've left the room.

This weekend we had an incredible couple of days. Our little guy really shines through in these moments. His smiles melt me to pieces. He giggles and laughs and interacts and chats and just absolutely blows me away. These are glimmers into who he really is, who he was always supposed to be, and who he is becoming. I am always proud of him, but even more so in these moments.

And then this morning we were back to difficult behaviors. This (finally) didn't surprise me because I'm figuring out the cycle a little better. But it's still hard to feel so out of control about what we can do as a family on a given day. We don't know what we can reasonably expect out of Baby S and what will be out of his reach.

As I struggled with not knowing how long the downward spiral might last, I looked out my window into my backyard. And I noticed these flowers. 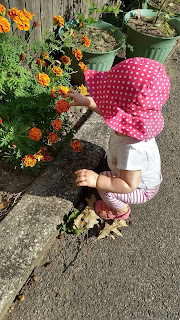 The baby wasn't chilling out there during said moment. Just so you know.
We don't leave babies wandering in the backyard alone.

These flowers were a gift to me from Baby S on Mother's Day. They were just bitty little green things sticking out of a red plastic cup decorated with stickers.

When he gave them to me I pretended to be excited, but inside I was grimacing. I was there the day he planted those seeds. It was a special activity for parents to attend at Baby S's preschool. I found childcare for Big Bro for the afternoon and brought along Baby Gigi in her stroller. We sat together with Baby S and his class on the grass in the shade of a tree.

Right on cue, another class came out with a ball. A BALL. During Baby S's time of maximum obsession with anything round. They decided to play with said ball RIGHT NEXT TO US. They were HITTING IT WITH A BAT. AND RUNNING. All of Baby S's favorite things in one place. He was mega excited.

And he said, "Heck no!" Not in words, you know, because pretty much his only word was "Ball" (which he screamed at full volume on repeat). His meltdown pretty much lasted until they left... Which was when it was time for us to go.

We managed to get him to focus just long enough to scoop some dirt into the red cup and throw some seeds on top. There were marigold seeds, mixed wildflowers, and at least one other kind. The spray bottle was a good distraction for a moment while he was watering the flowers, but then he had to pass that to the next kid, and it was maximum meltdown time again.

And the wind was blowing the dirt in my eyes. And I wanted to melt down too.

So in summary... It was a disaster. He didn't have fun. I didn't have fun. Baby Gigi didn't get my attention. I had to cash in on a babysitting offer with Big Bro, and those are valuable and not to be wasted.

I didn't realize until this morning that something beautiful came from that disaster of an afternoon. The splash of orange along my fence that makes me smile as I do the dishes... The smile Baby Gigi gives me as she touches the flowers and enjoys their soft feel (and taste, but don't worry, Google says they're not poisonous)... The fun Big Bro and Baby S and I have watering them together with the hose... All of these things came from that rather terrible afternoon.

I'd like to think that this pretty bunch of flowers in my yard is just a glimpse of deeper things that came from that day and many days like it. So often we don't get to see what was at work on the most discouraging of days. We don't get to see how God will use our sacrifices for our good and the good of those around us.

But sometimes we get little glimpses. I think we need to hold onto them. One of my favorite bits of wisdom from Paul and Timothy in their letter to the church in Philippi is this: "[be] confident of this, that he who began a good work in you will carry it on to completion until the day of Christ Jesus."

Try not to lose that confidence, friends. The dark days and downward cycles will come, but they are not the end. We can't always see what is growing in those moments. But I pray that God will faithfully use them for good, and I trust that he will keep his promises.
Posted by Heather